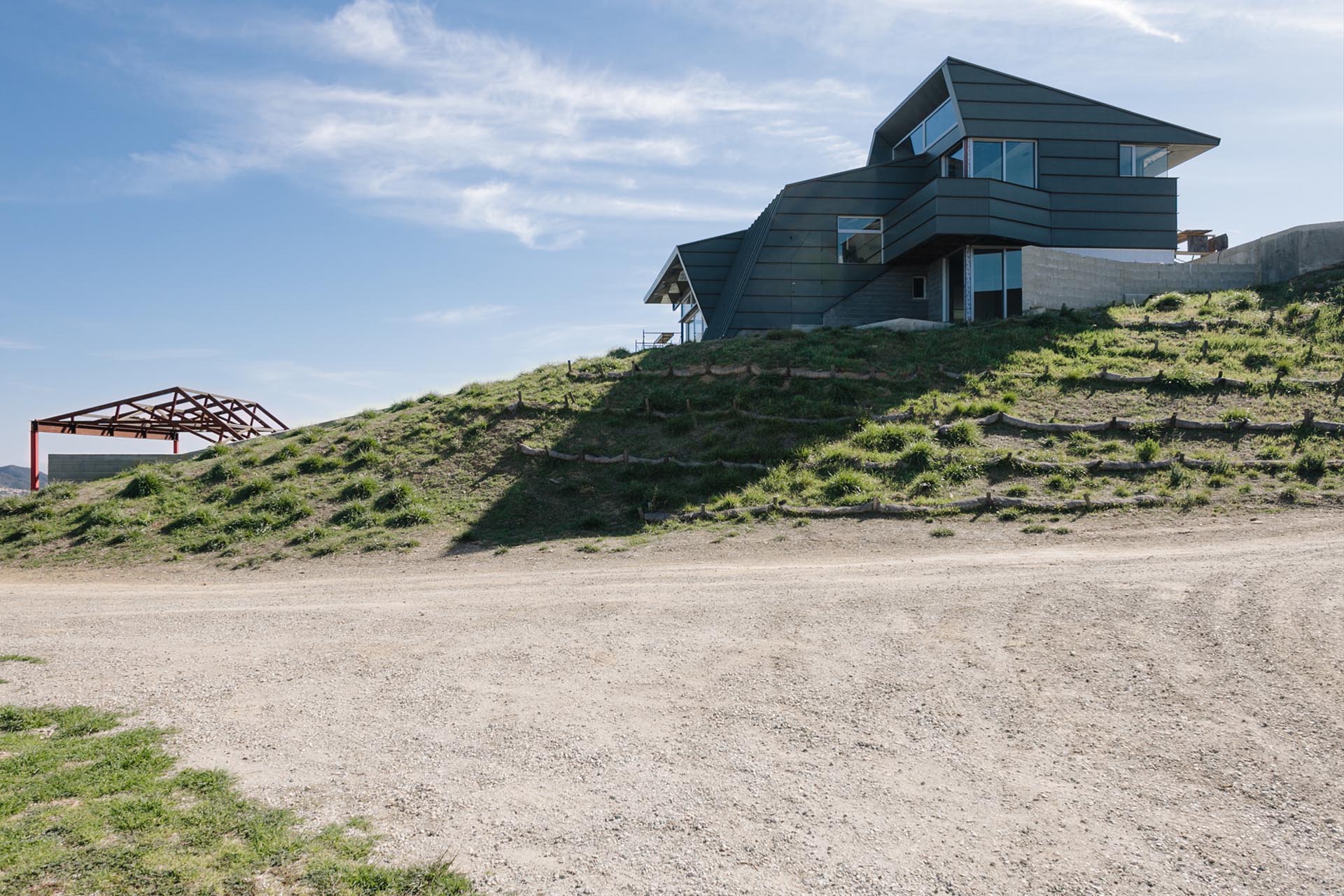 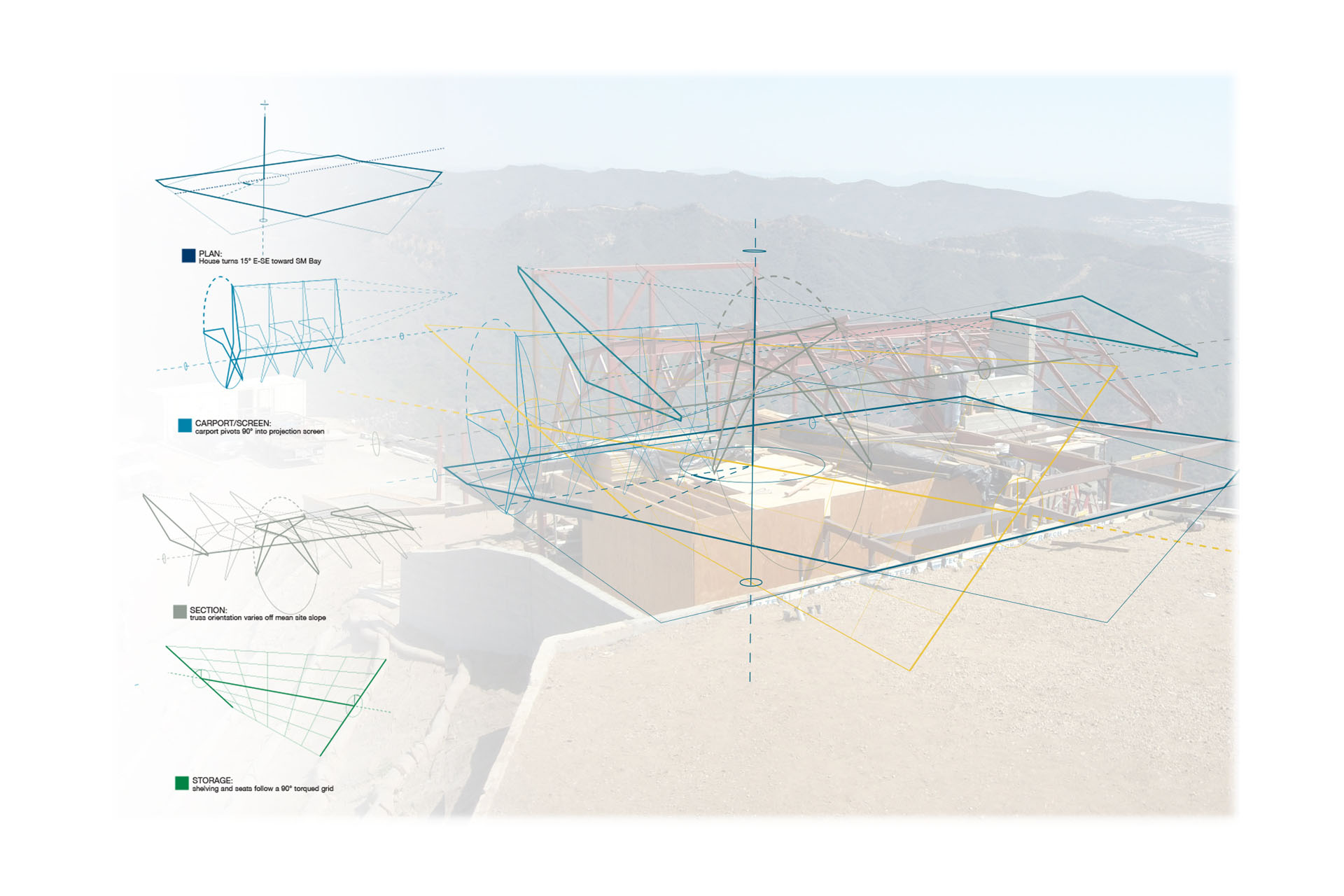 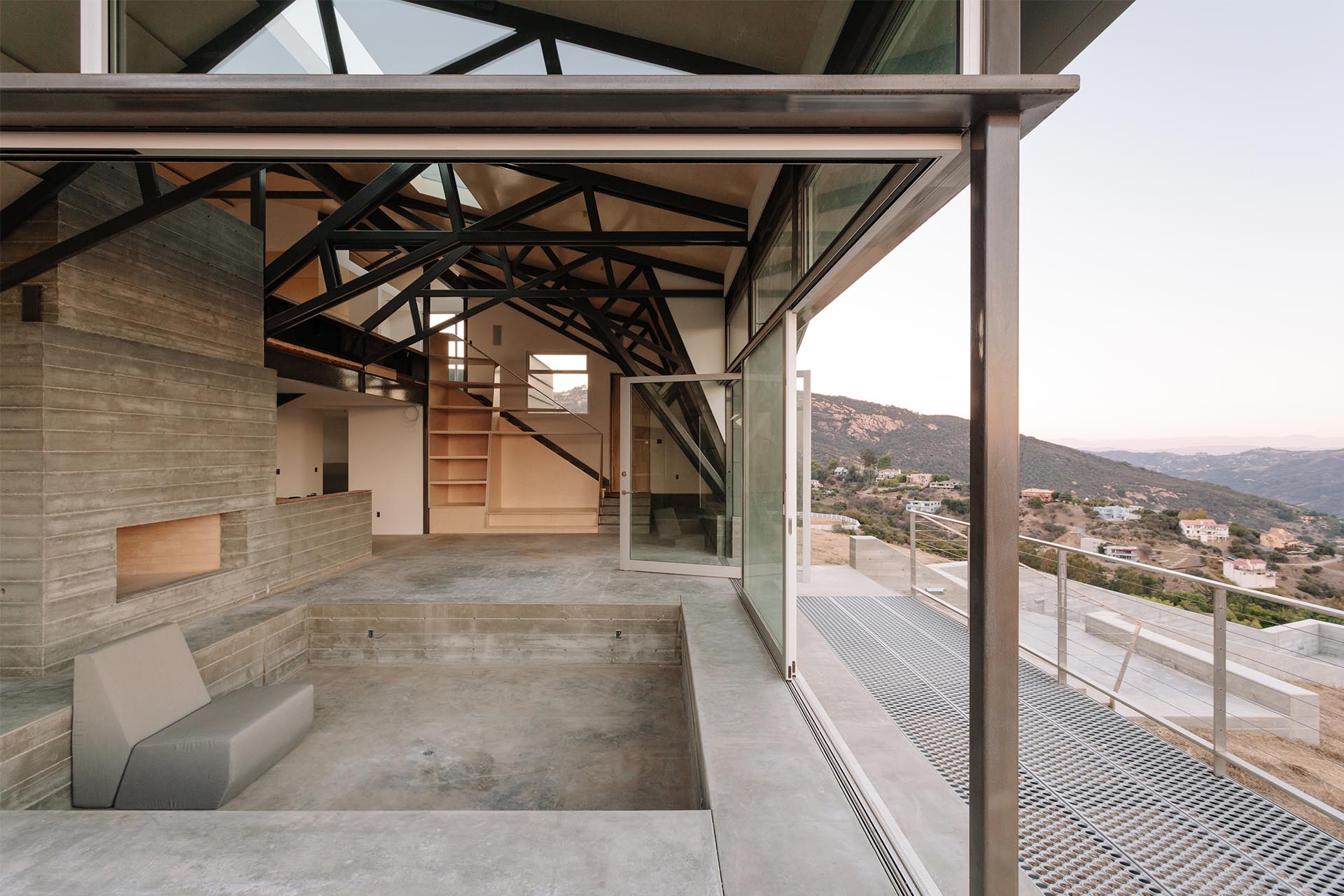 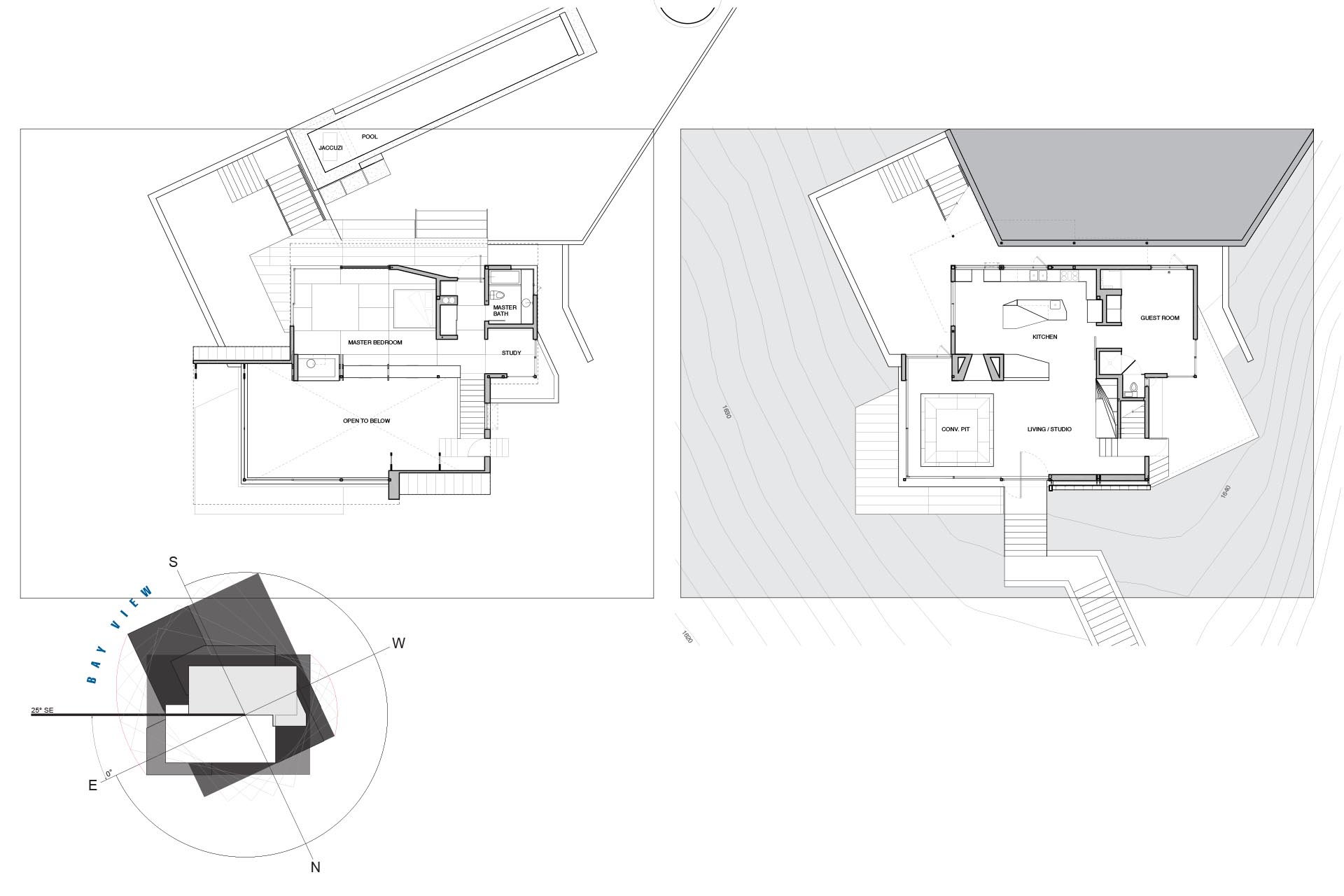 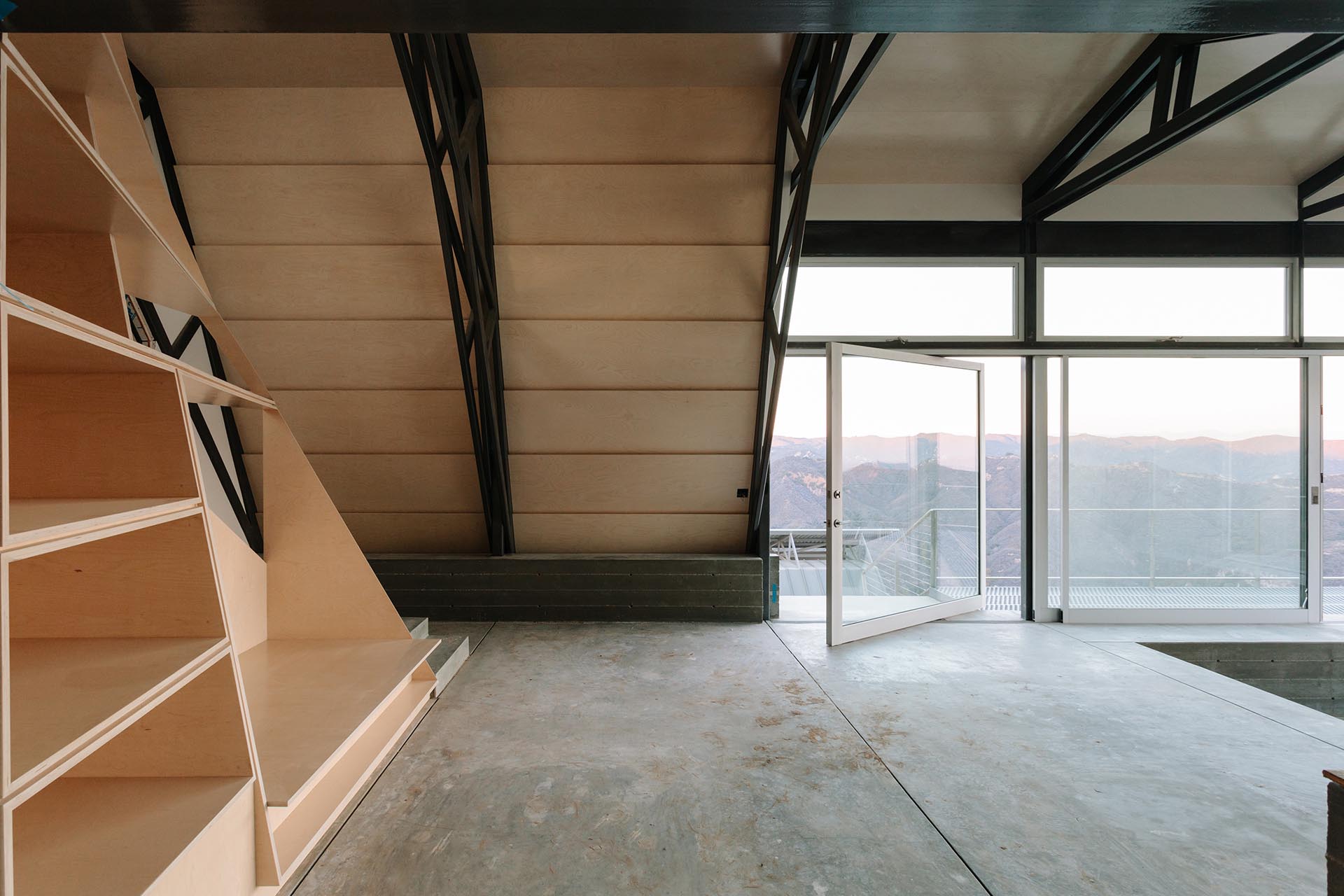 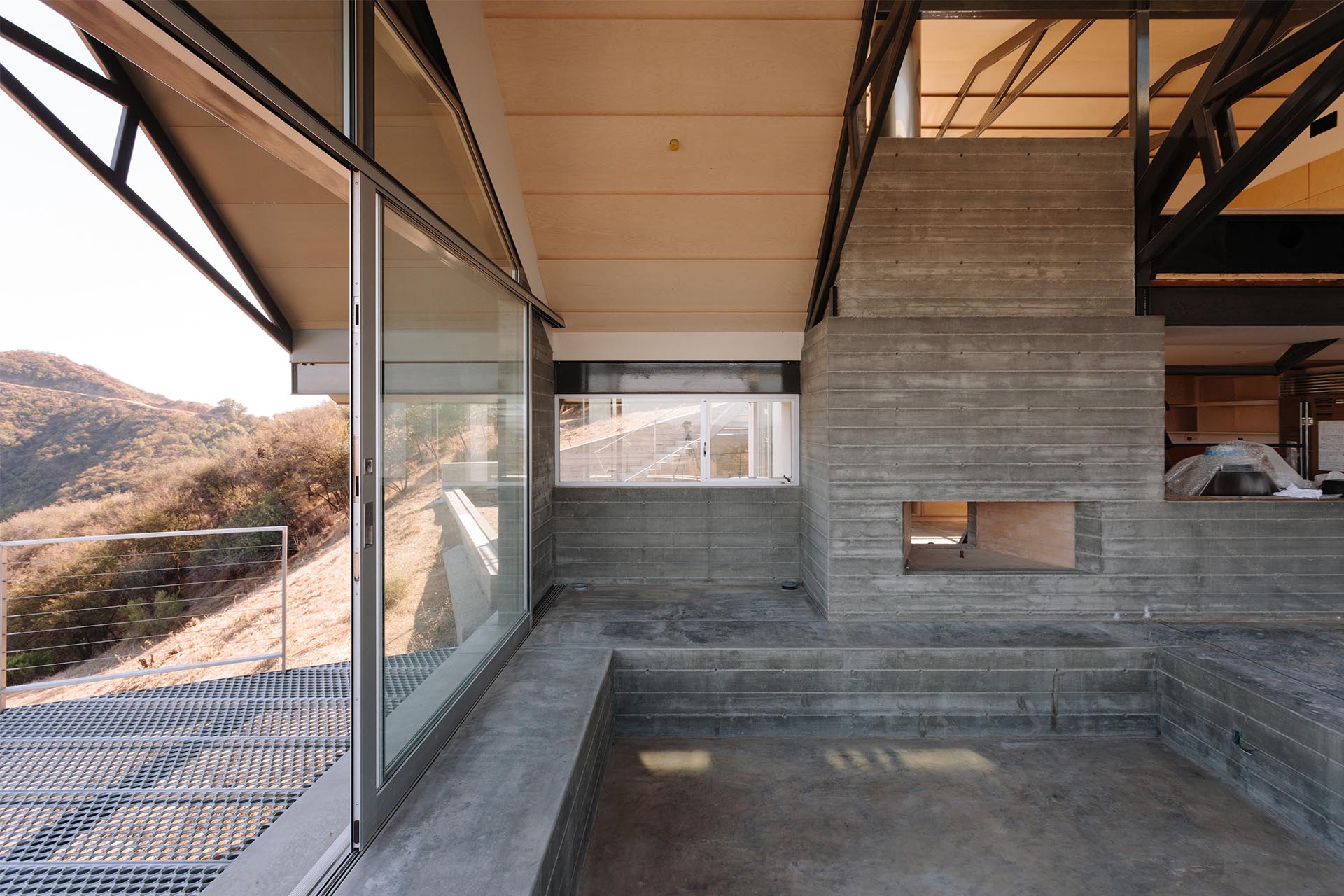 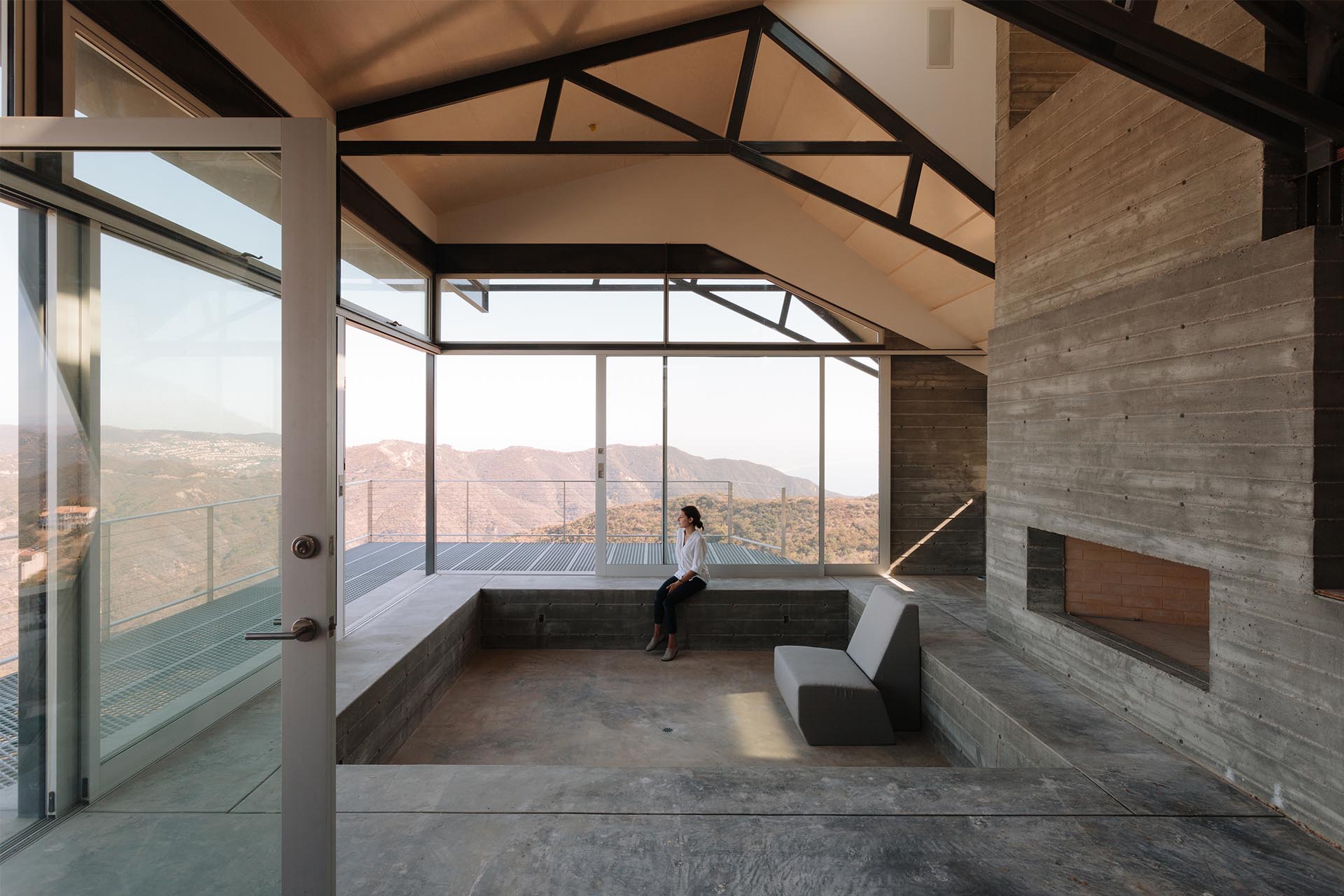 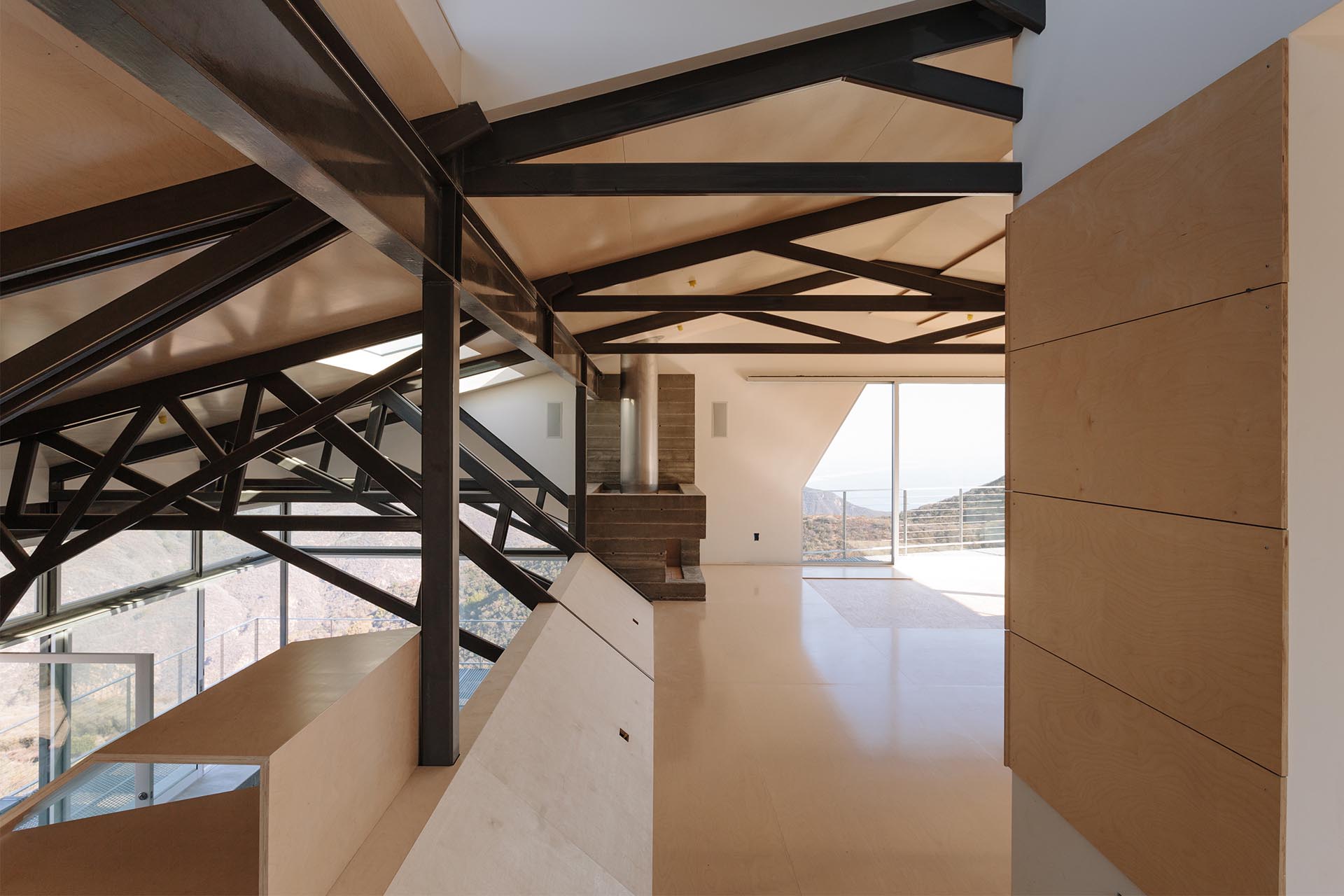 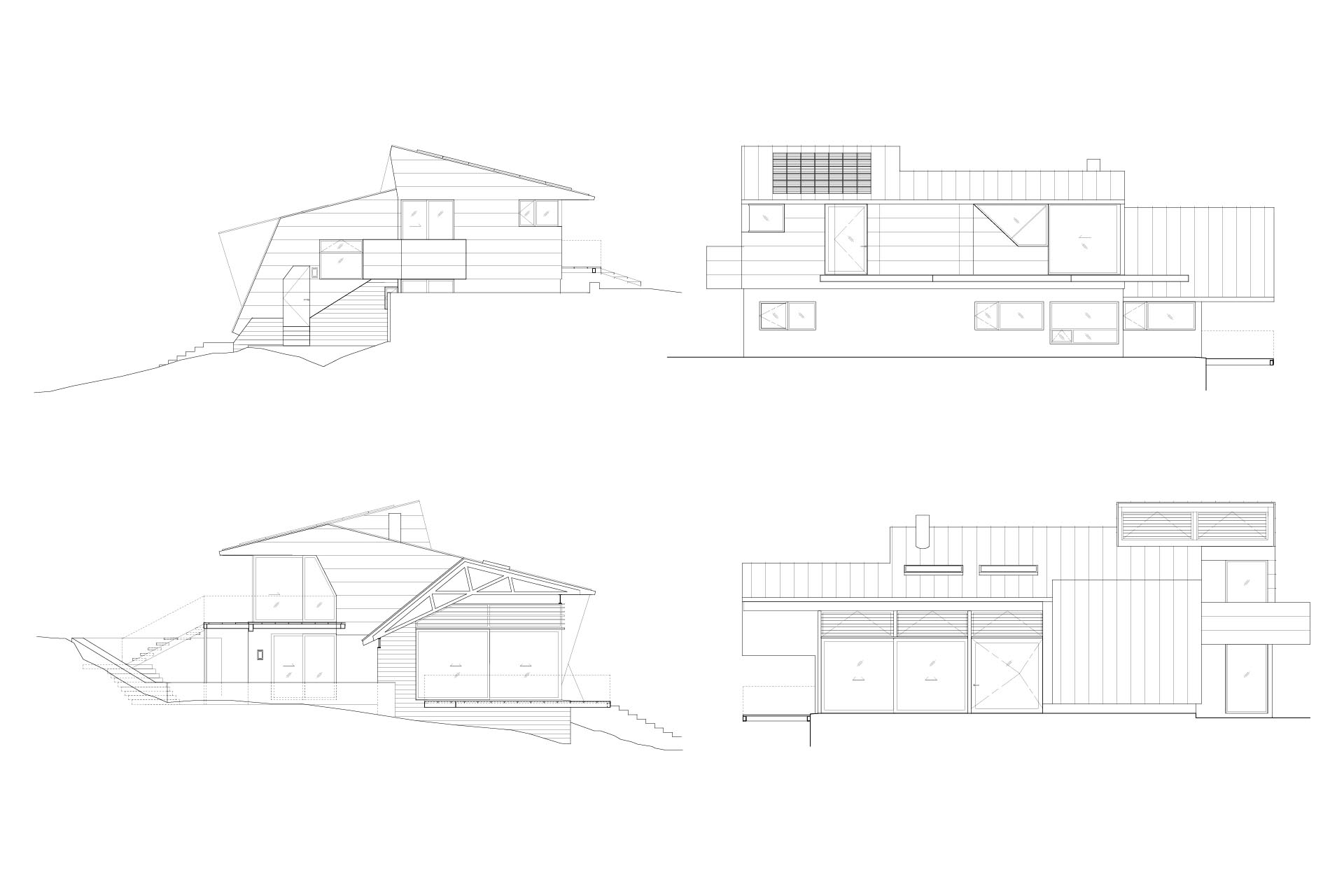 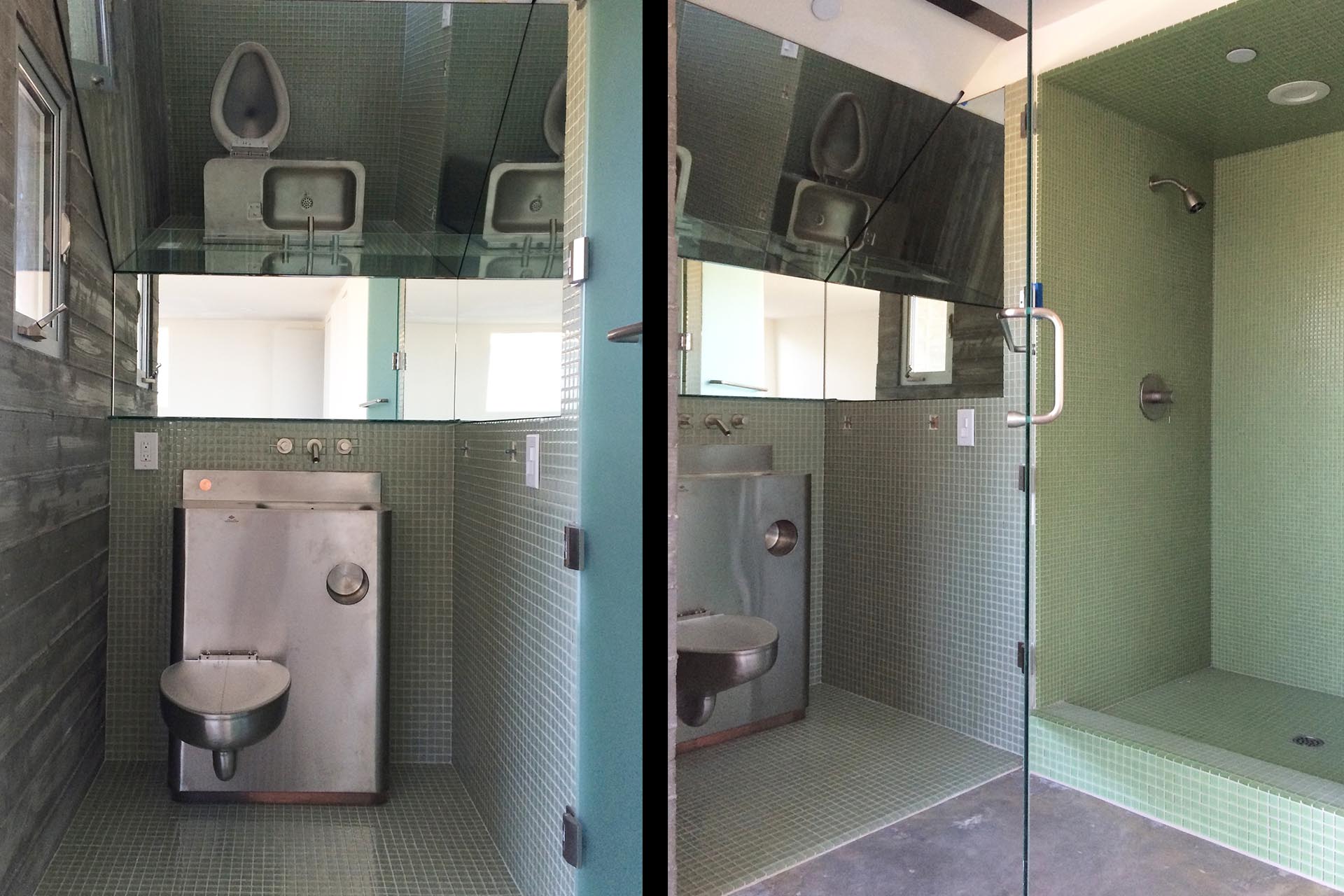 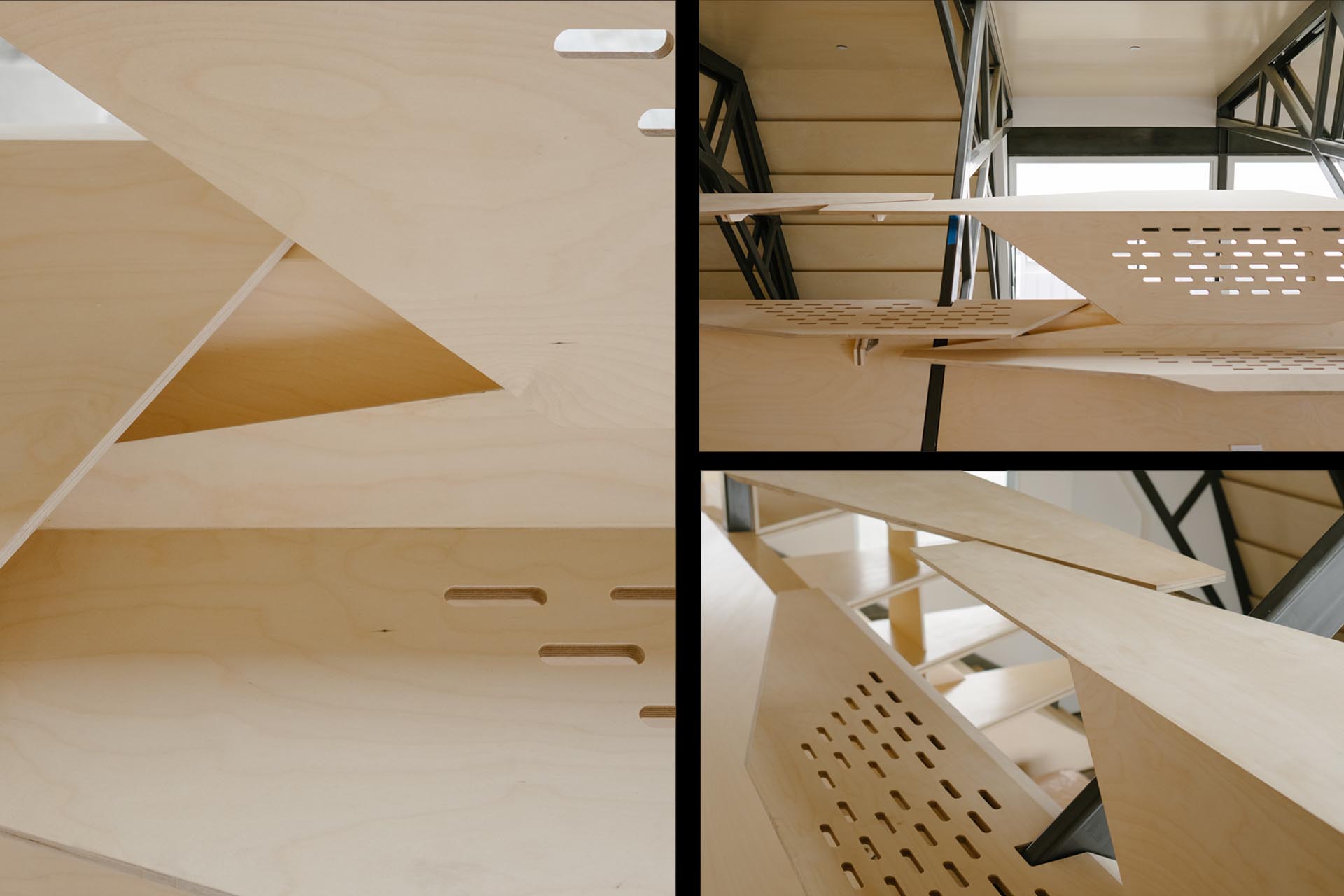 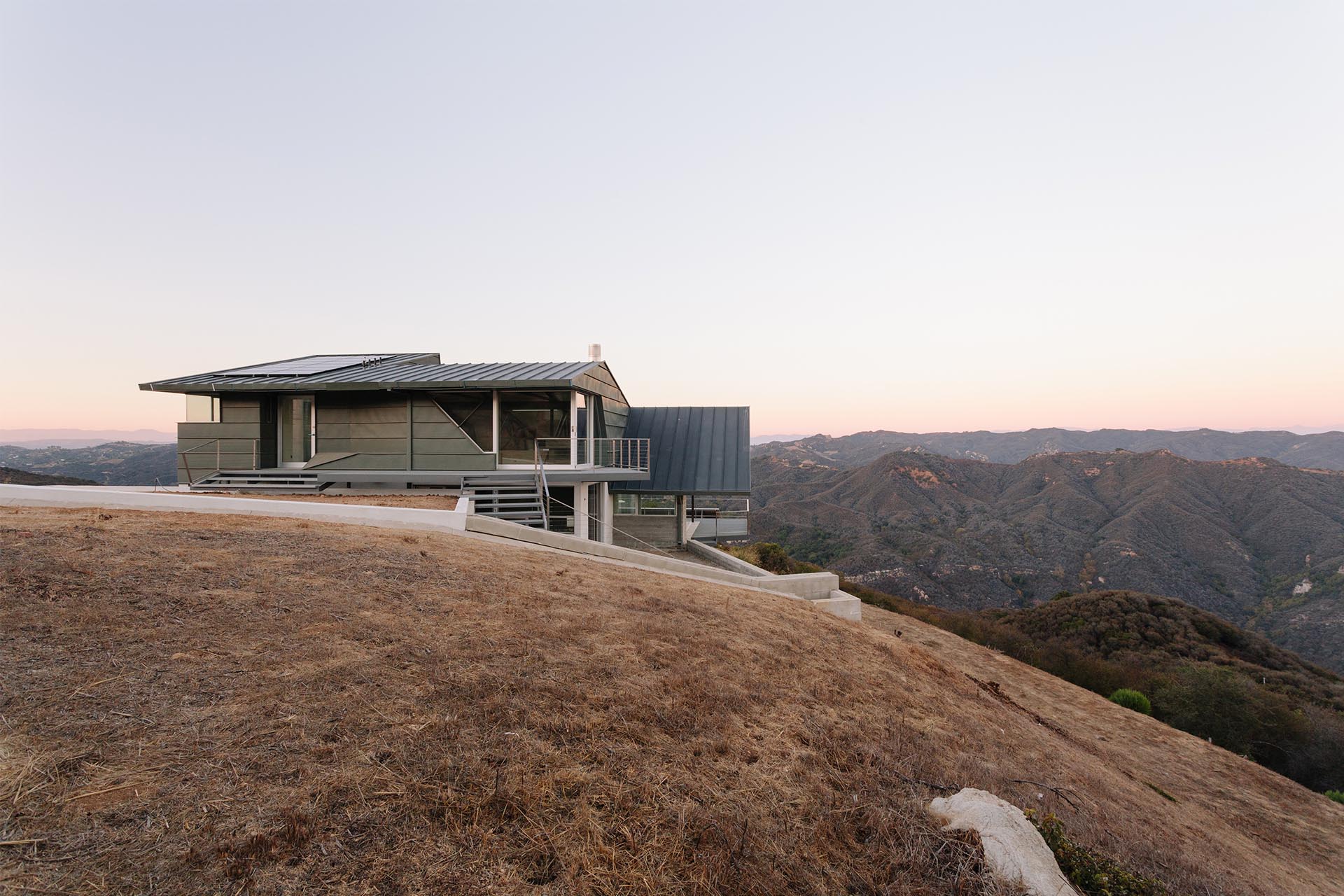 In 1992, all of Skyhawk Lane burned, along with 39,000 acres of neighboring Topanga and Malibu, reducing all foliage to soot, and property values to half of their pre-burn high in the late ‘80s. Fire allowed the clients’ purchase of the land, but remains a constant concern. Skyhawk Lane runs along the Pacific edge of Topanga Canyon, a microecology that urban historian Mike Davis once termed “a revolutionary, not a reformist landscape… Walden Pond on LSD.”

Odds are, the land will burn again. Fear of fire, flood, slides and erosion dictate stringent setback, cladding and planting guidelines enforced by the state-wide Coastal Commission and myriad county and city agencies. During design development, we assessed first what would be left to rebuild if 4/WAY did burn, and how the site might shield other homes and safely serve firefighters. The 2,250sf retreat mediates between competing topography and sight-lines, and between the allure and danger of life in Topanga.

To take advantage of a distant but commanding view of Santa Monica Bay, the house folds across the grain of a steeply sloping ridge, ducking upslope neighbors and cutting into the hillside to cool the lower floor. A fire-proof retaining infrastructure supports a web of trusses clad in standing-seam RhineZinc. Two standard truss profiles, in two orientations, form a faceted cascade over studio space and kitchen below and living space above. Surrounding terraces act as both fire buffer and a complement of outdoor rooms. A carport tilts up to become a projection screen for the upslope living room.

The home is comprised of two parts, a 1500sf main structure and a nearby 600sf subterranean guesthouse, to be completed in 2012. The main house is a single 60’x25’ open space, punctuated by two service volumes containing a full and half bath, galley kitchen and service and storage space. These two volumes flank the entry and act as a buffer against southern exposure.

With the completion of the solar array, the C-Glass House will be plausibly ‘off-grid.’ Radiant heating in all floor slabs, zero air-conditioning, and the surprisingly robust thermal performance of both glazing systems minimize the house’s energy consumption. Water is provided by well and composting and a septic seepage system convert almost all waste on site.