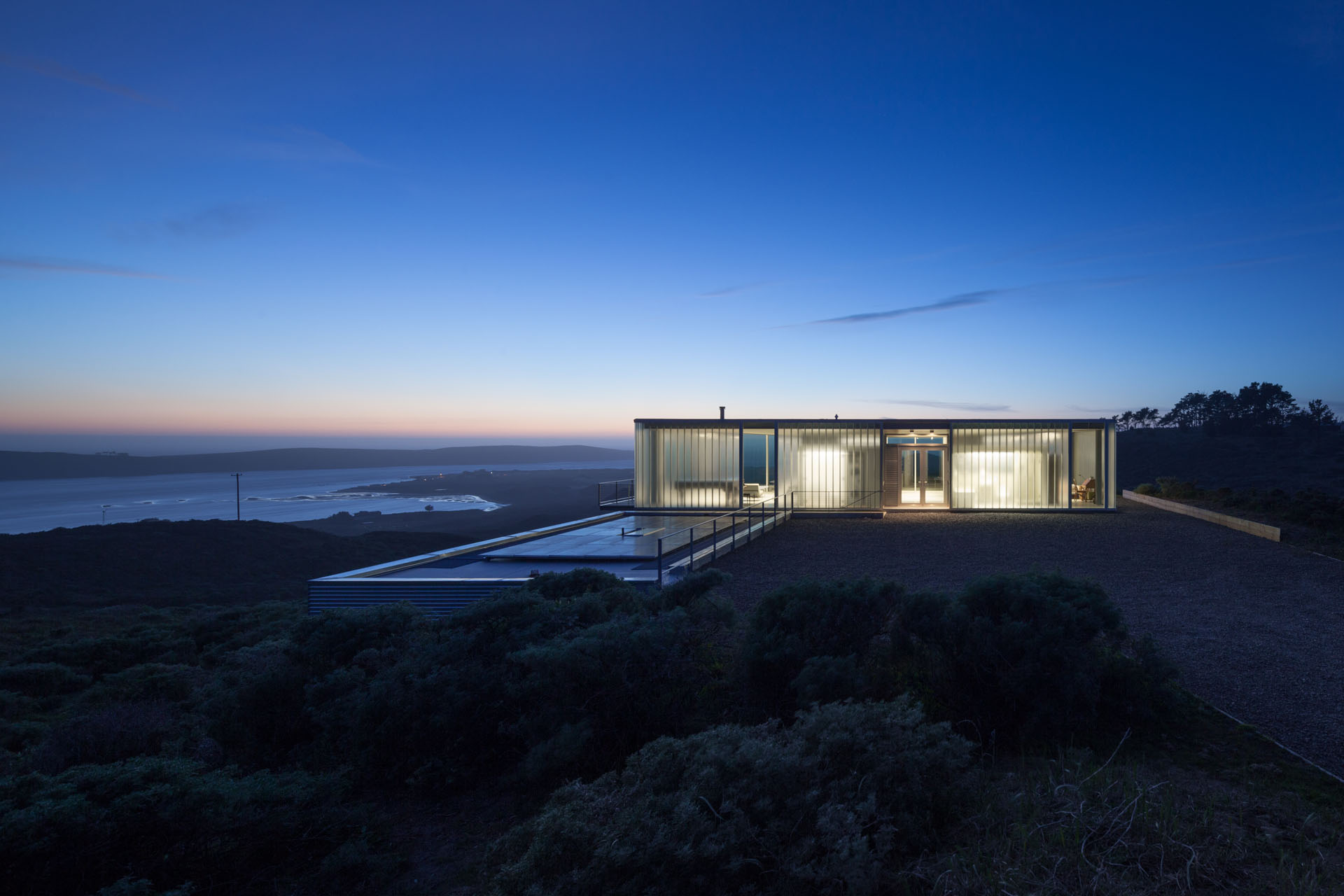 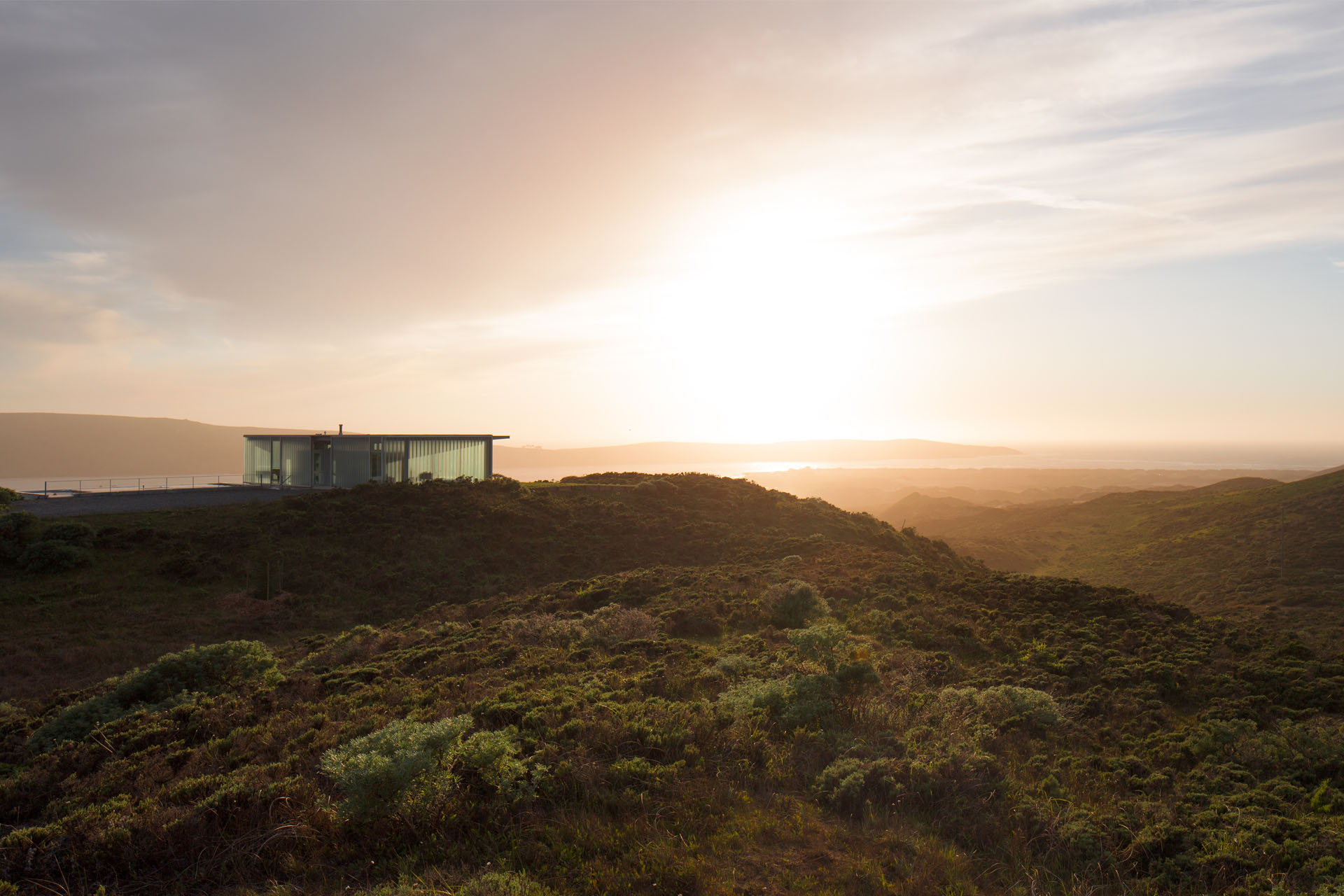 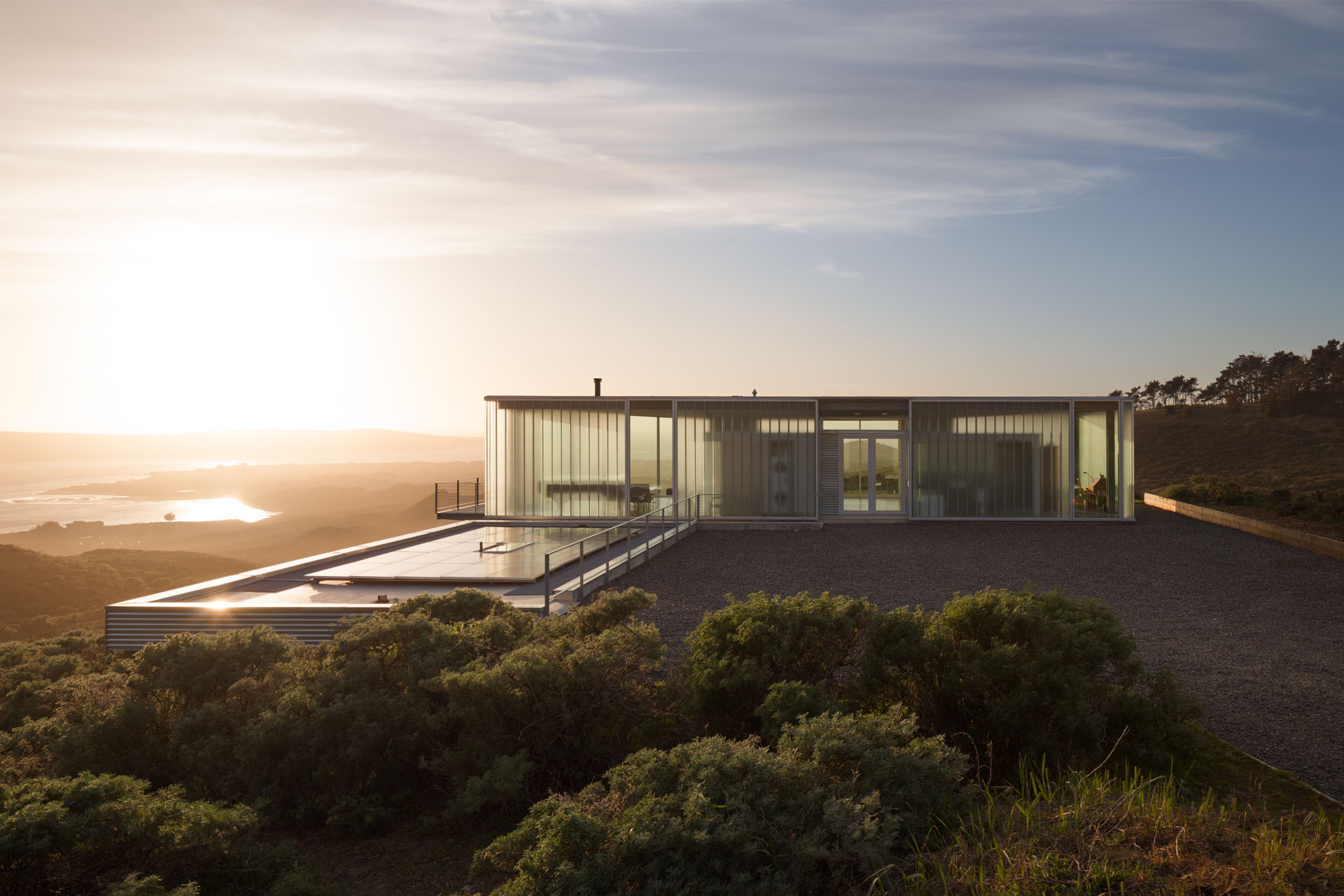 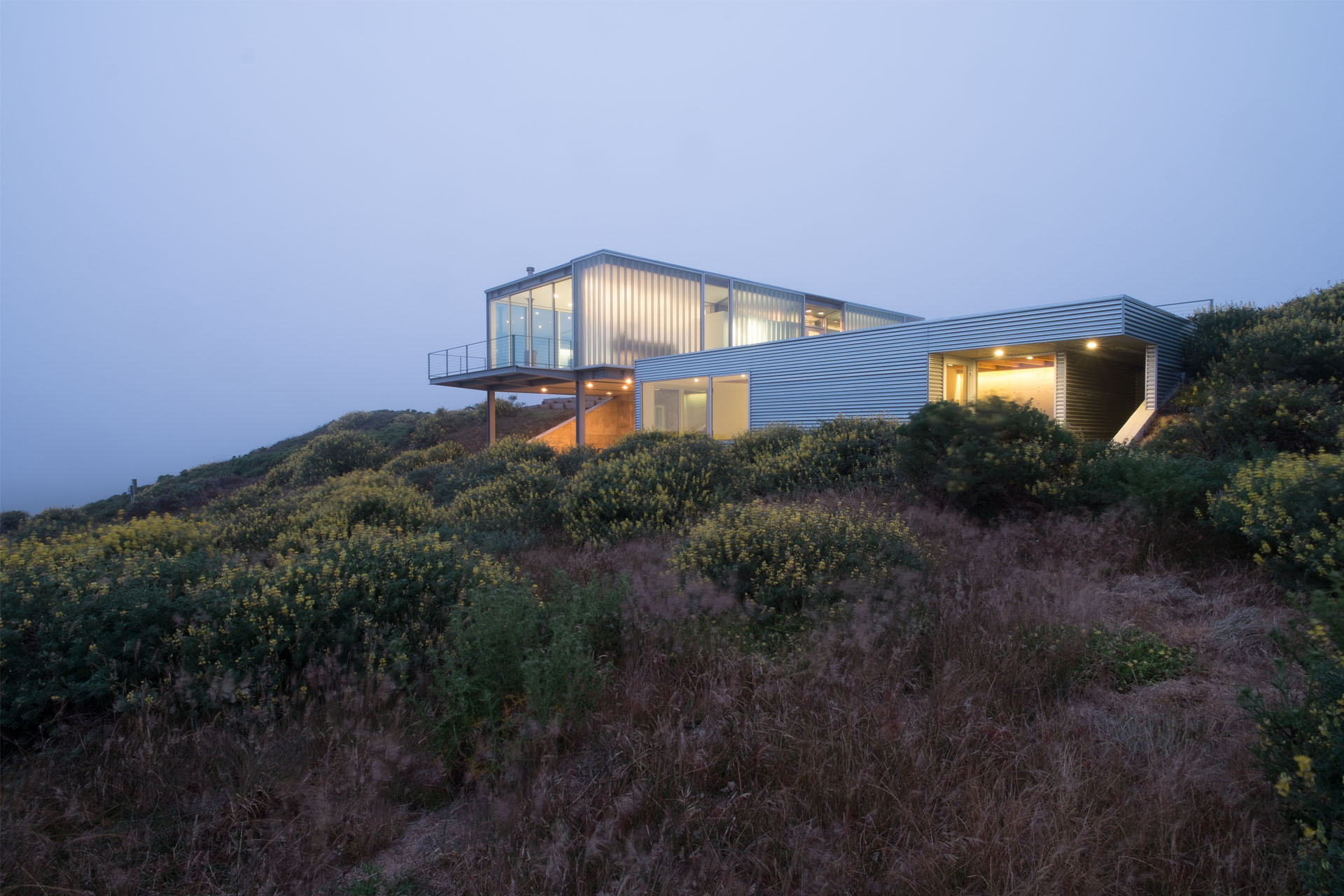 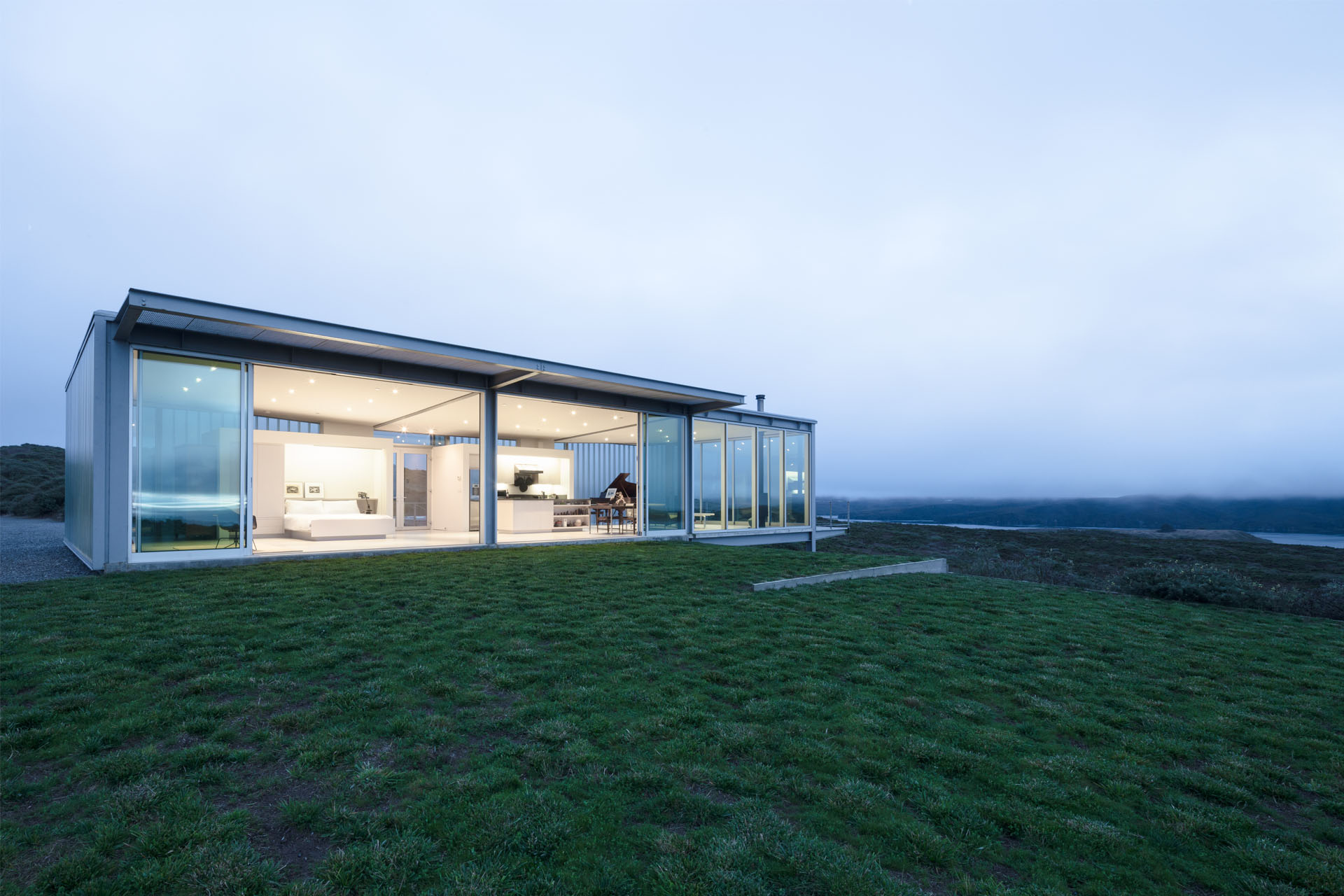 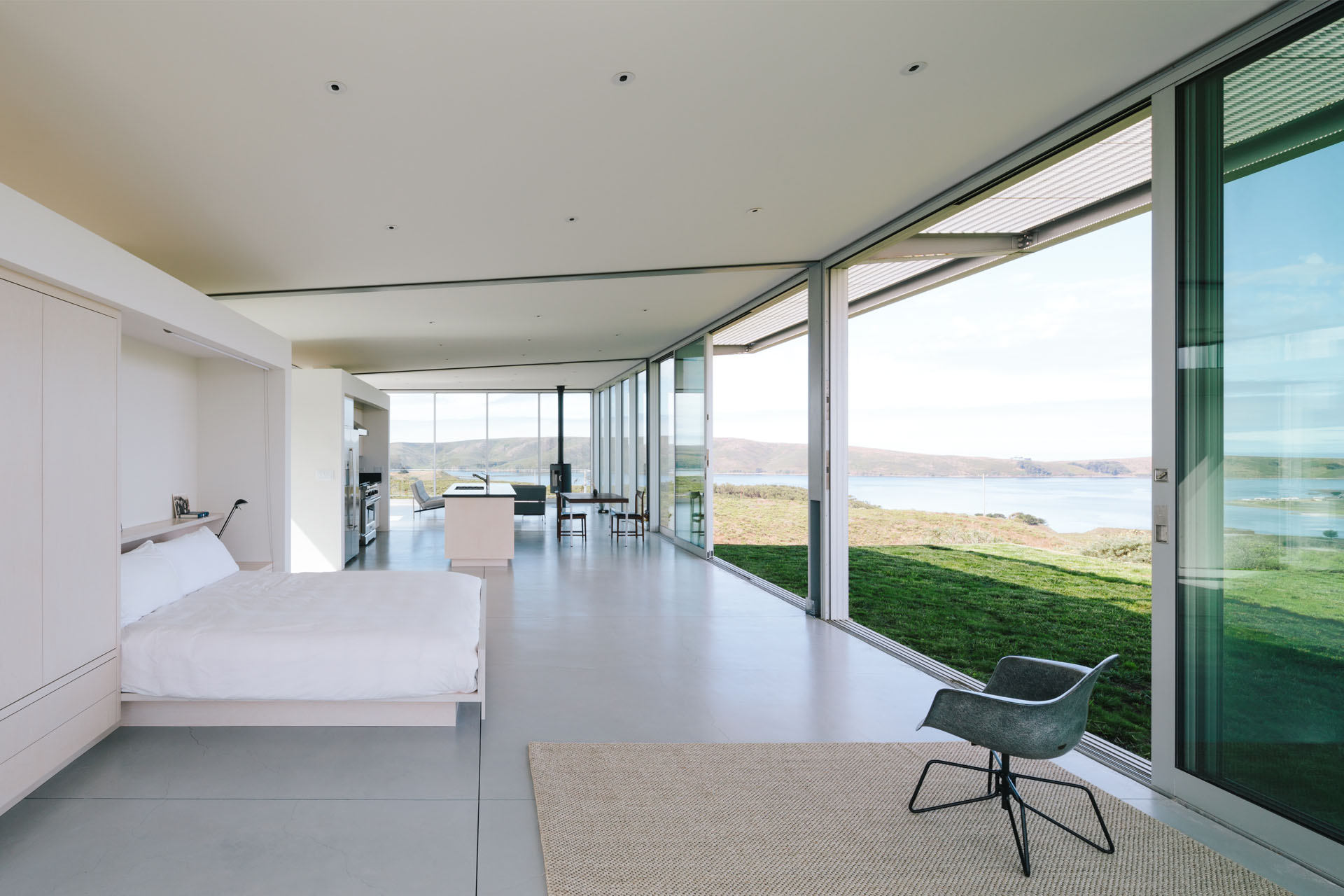 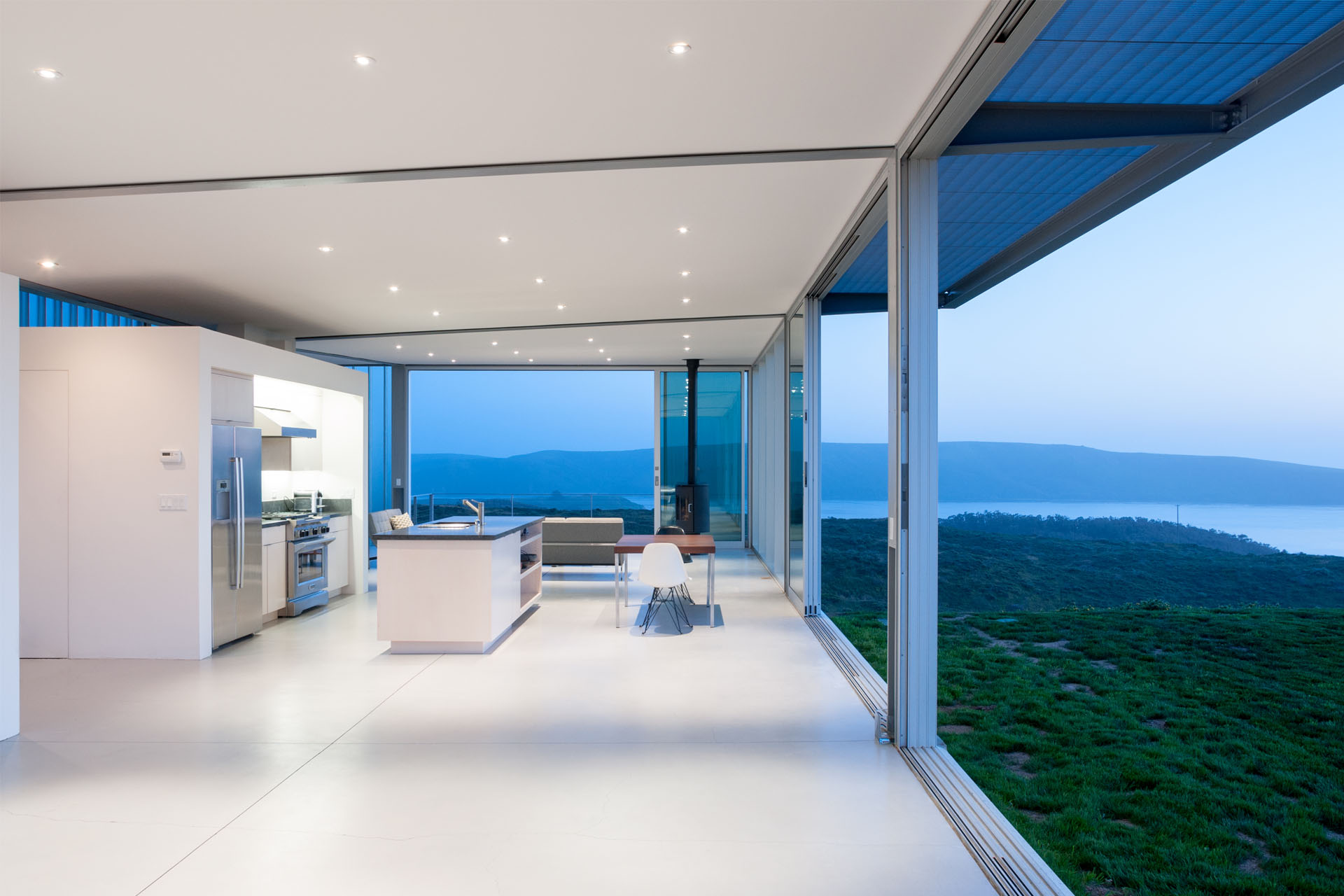 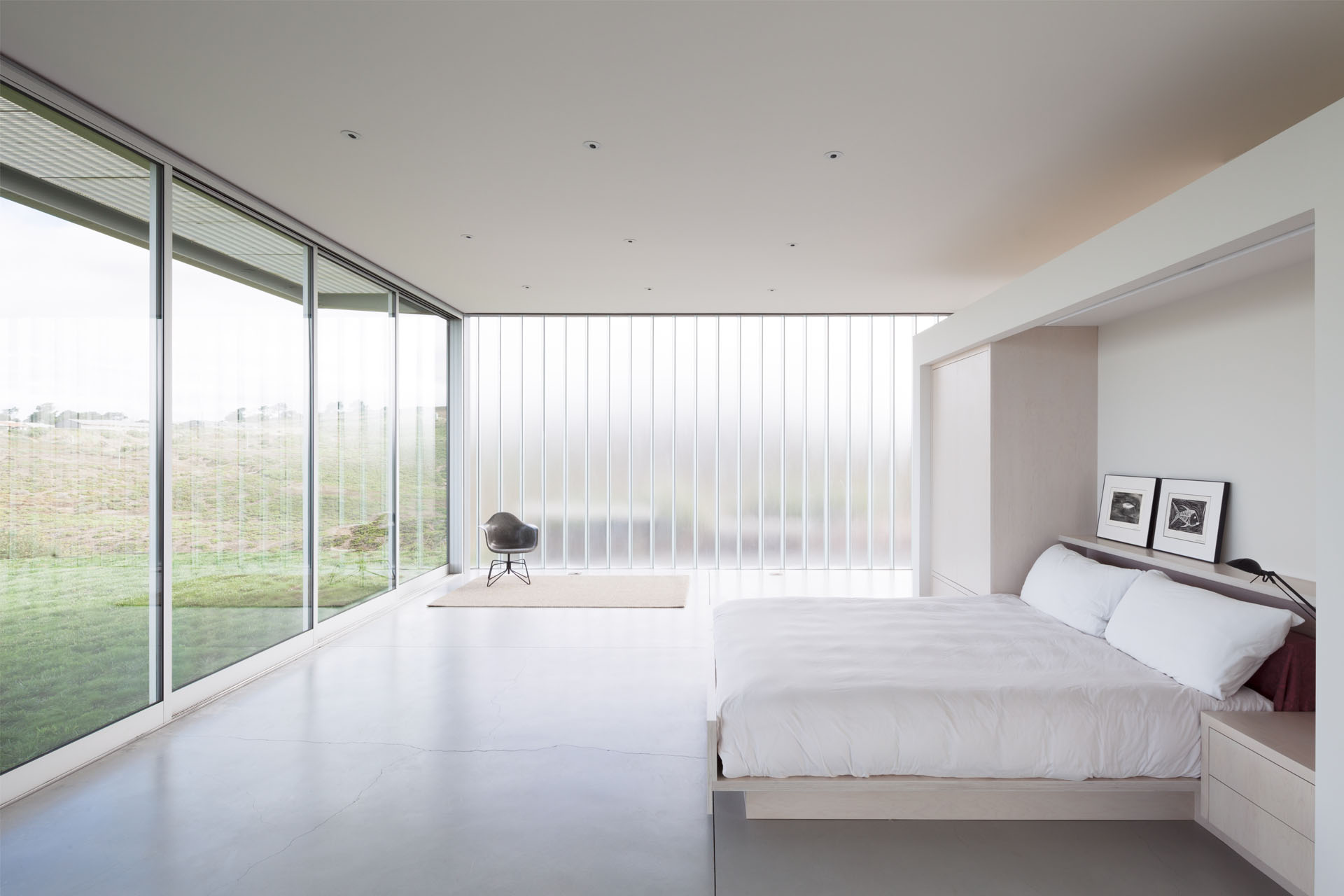 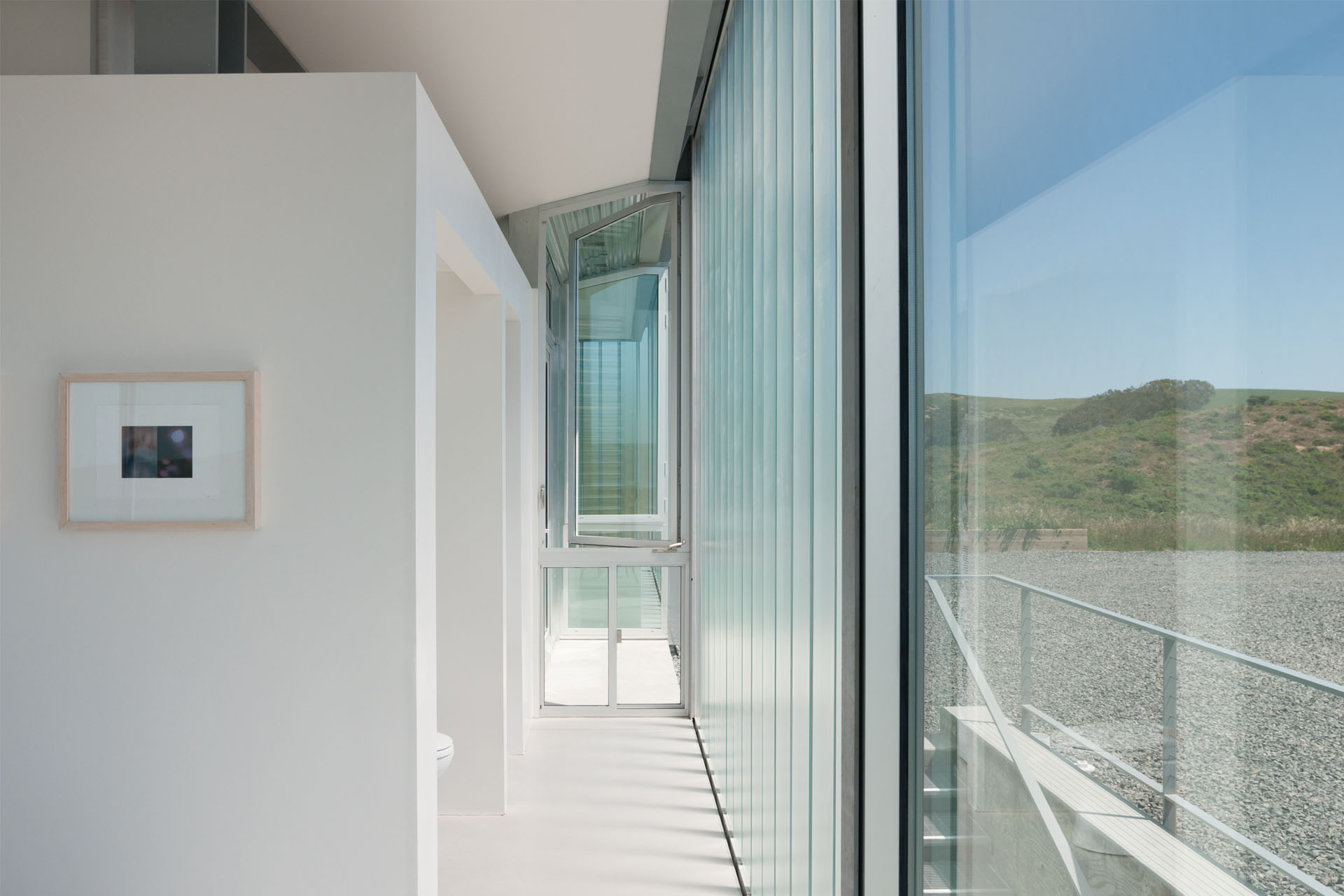 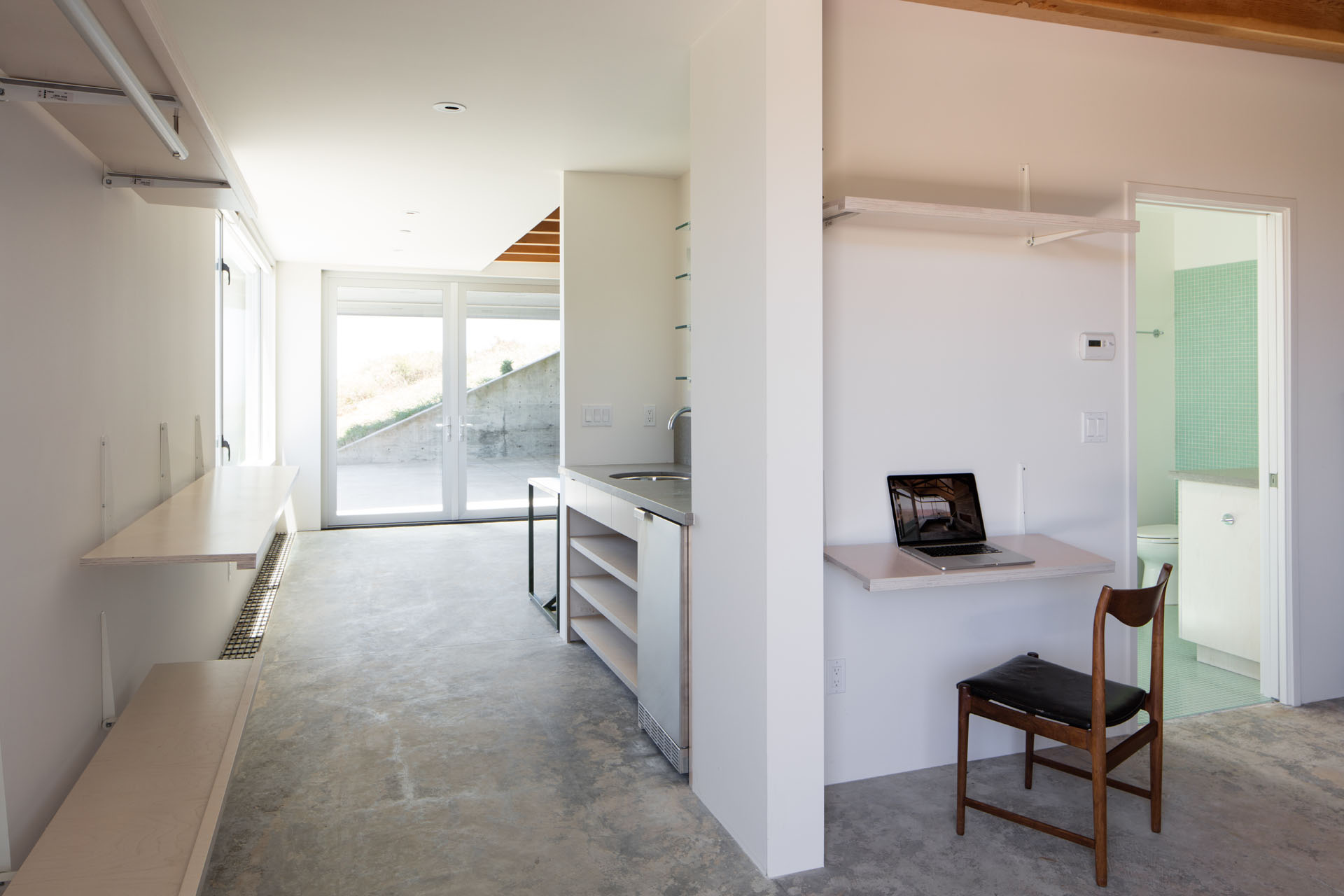 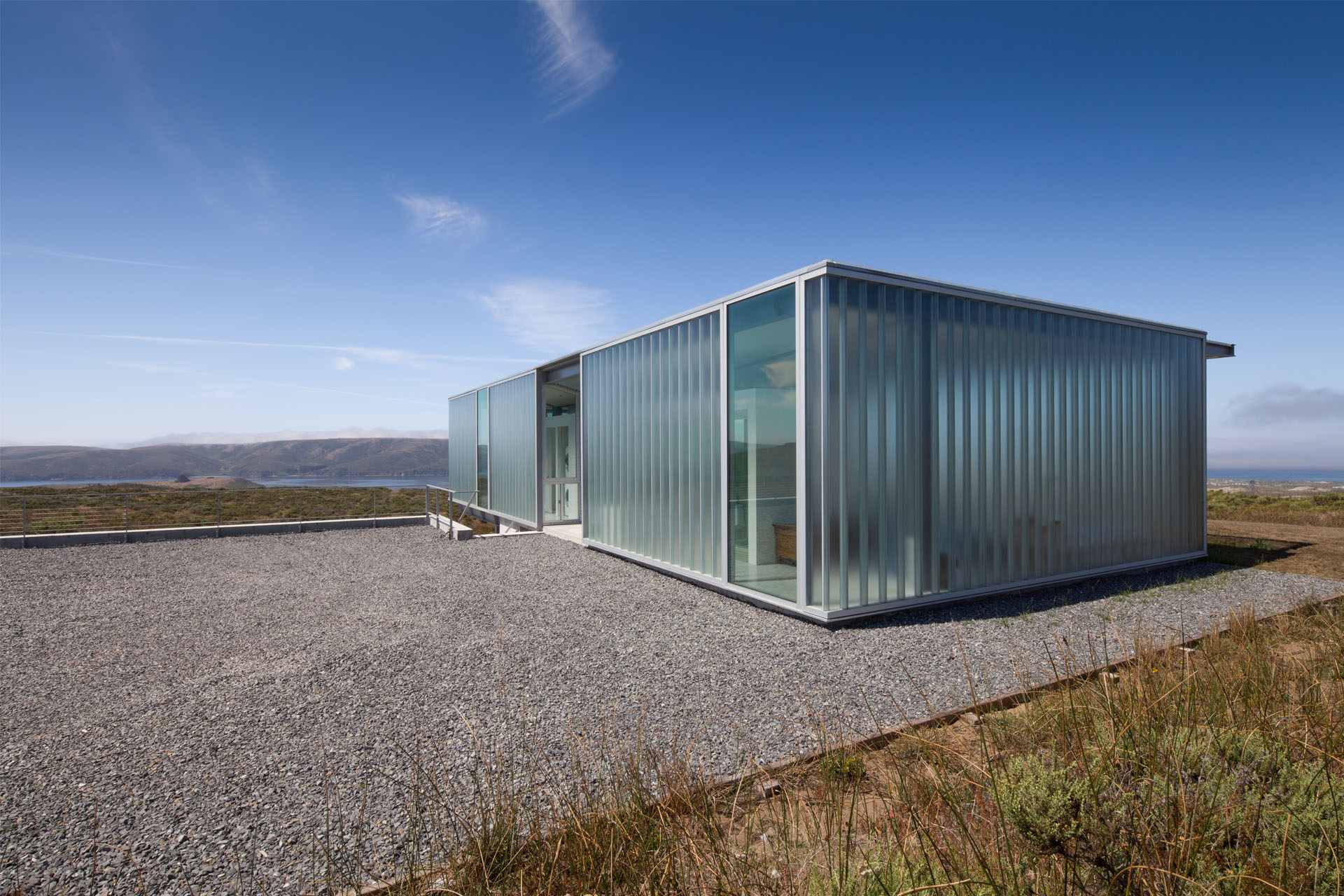 The C-Glass House is a 2100sf retreat in northern California. Set on a spectacular but periodically wind-swept site, the C-Glass House opens to a panoramic view of Tomales Bay and the open ocean, while bracing against winds that approach 100mph from multiple directions. The initial Marin Green Home rating on this project exceeds their Platinum level.

The design engages not only Philip Johnson’s Glass House and the Farnsworth House by Mies van der Rohe (the client helped translate texts for Mies’ 1972 retrospective at MoMA), but also the California legacies of Elwood, Koenig and others. In contrast to earlier ‘vitrines in a garden,’ west coast glass houses bias towards the environment, employing tactics of framing, cantilever and directional enclosure to heighten, as well as quantify, the beauty of their surroundings. C-Glass House brokers between the Leica-like precision of high modern glass houses and the cinematic wideframe of the Case Study generation.

Though its architectural lineage is self-evident, this glass house is as indebted to artists’ explorations of glazed enclosures as it is to the precedents of Johnson and Mies. Larry Bell’s elevated cubes and Dan Graham’s many pavilions capitalize more on the reflective and refractive ambiguities of the medium than its transparency, as do mirrored works by Gerhard Richter and the aquarium-like cages of Damien Hirst. The C-Glass House bridged between these ambitions in a new way, opening up to a panoramic vista but also modulating and reflecting back on architecture’s evolving role in the American landscape.

The home is comprised of two parts, a 1500sf main structure and a nearby 600sf subterranean guesthouse, to be completed in 2012. The main house is a single 60’x25’ open space, punctuated by two service volumes containing a full and half bath, galley kitchen and service and storage space. These two volumes flank the entry and act as a buffer against southern exposure.

With the completion of the solar array, the C-Glass House will be plausibly ‘off-grid.’ Radiant heating in all floor slabs, zero air-conditioning, and the surprisingly robust thermal performance of both glazing systems minimize the house’s energy consumption. Water is provided by well and composting and a septic seepage system convert almost all waste on site.